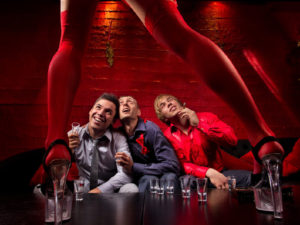 Yesterday, I asked: Why do men go to strip clubs?

As part of my ongoing look at the strip club economy, I wanted to know the psychology behind the demand.

I put out a call to my readers, asking them why they go to strip clubs. I heard from commenters on Google+, got responses on Twitter, and received three email letters from men revealing why they pay for lap dances.
Recommended by Forbes

Here’s what I learned.

On Google+, one woman commented: “I’m from Vancouver and I went to strip clubs with guy friends because the beer was cheap and hockey was always on the TV.”

A man on Google+ commented: “IDK; after the novelty wore off (pretty quickly), it became boring and then kind of sad. So empty….” Another opined: “If I could give you just one short answer it would be: because they can.” Another asserted: “If you like music, go to a rock concert; football, go to a football match; naked women, a strip club.”
ADVERTISING

On Twitter, a male follower tweeted: “I go to strip clubs when I know the feature. I get plenty of stimulation at my work, I don’t have to go out and LOOK for it.” (Open Salon has a handy definition of a feature dancer versus a house dancer.) A woman wanted to know: “why do they assume only men go? My girlfriends and I go and have a great time.”

In an email, a strip club patron offered a poignant peek at why he goes.

The primary reason that I go to strip clubs is #7 on your list: loneliness. In the dead of night, alone at home, the loneliness sometimes becomes unbearable. There aren’t many places to go in the middle of the night, and most of those choices don’t necessarily ensure any kind of reasonable human interaction.

I like to think I hold up my end of the bargain; I spend money, tip well, and am clean and polite. In exchange, women talk to me and there is usually light non-sexual touching which I find very comforting. Sometimes I will calm down enough to find parts of it arousing.

This can be particularly exacerbated on business trips; in a strange city where I may not know anyone or speak the language, in the blandness of a hotel room, strip clubs are places where I know I’ll be chatted up.

Another emailer said his reasons for going changed over time.